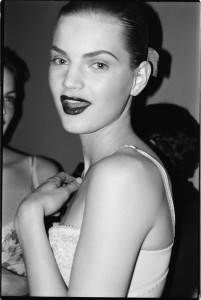 ONCE UPON A TIME

Text by Gloria Magni
Their first appearance on Milan’s catwalks was more than startling.  It was 1985. The ruling styles were the all black concept from Japanese designers, the maximalism showed by the yuppies and the androgyny of the woman with broad shoulders. Then Dolce & Gabbana introduced the archetype of the Mediterranean woman. A shapely and deeply sensual creature, who enjoys wearing dresses that can change thanks to Velcro closures or small laces and underskirts that mischievously glide over the body. We saw them on the big screen, worn by Anna Magnani, Sophia Loren or Anita Ekberg, as to set a never-ending link with the Italian auteur cinema. However, success was not so quick. It came only during the Nineties, when Domenico Dolce and Stefano Gabbana began to arouse appreciation overseas and turn into a major brand, thanks to their broader and broader Sicilian character. These auteur shots, taken by Leonardo Vecchiarelli, show a catwalk in 1995, when dresses were worn in the first place by beautiful women with prominent features and personalities, before even being models. At that time, massive globalisation had not levelled their features off yet, as happened then with tastes, trends and moods.  They were true women, with expressive faces, statuesque bodies and imperfections, too. Among the others, Naomi Campbell, Valeria Mazza, Carla Bruni, and Kate Moss, portrayed here during a backstage such as mid-century stars, strongly radiant and feminine, among mirrors, pins, make-up and the chaotic back and forth that precedes each fashion show.

Thank you Domenico Dolce and Stefano Gabbana for giving us each time a different dream.