The section “Great Stories of the Bible” will tell in short the stories of the main characters in the Ancient Testament. Our goal is to inform the reader with a pleasant and simple style and to excite his curiosity, inviting him to a personal reading of the Word of God. English translation used for the biblical quotes is the New Heart English Bible (2014). 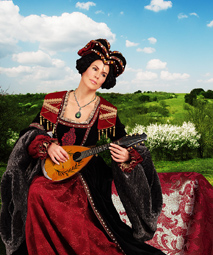 With the month of November we begin a new section of the site, dedicated to the religious deepening of the Great Stories of the Bible. The Revelation of God in fact «is realized by deeds and words having an inner unity: the deeds wrought by God in the history of salvation manifest and confirm the teaching and realities signified by the words, while the words proclaim the deeds and clarify the mystery contained in them» (Dei Verbum, n. 2). The Revelation develops in a history of salvation between God and men, in which God «out of the abundance of His love speaks to men as friends  and lives among them, so that He may invite and take them into fellowship with Himself» (see Dei Verbum, n. 2). In this history, that starts from the creation of man and culminates in Jesus Christ, we are involved too; biblical stories can help us to contemplate more and more clearly the Face of God that «is the same yesterday, today, and forever» (see Heb 13,8), his neverending love and his projects for mankind.
Since Advent is coming I thought of writing about the story of the four women that the evangelist Matthew includes in Jesus’ genealogy, apart from Mary his mother. It is a very strange thing for the patriarchal society of that period: «Abraham was the father of Isaac, and Isaac the father of Jacob, and Jacob the father of Judah and his brothers, and Judah was the father of Perez and Zerah by Tamar, and Perez was the father of Hezron, and Hezron the father of Ram, and Ram the father of Amminadab, and Amminadab the father of Nahshon, and Nahshon the father of Salmon, and Salmon the father of Boaz by Rahab, and Boaz was the father of Obed by Ruth, and Obed was the father of Jesse, and Jesse the father of David the king. And David a was the father of Solomon by her who had been the wife of Uriah; and Solomon was the father of Rehoboam, and Rehoboam the father of Abijah, and Abijah the father of Asa; and Asa the father of Jehoshaphat, and Jehoshaphat the father of Joram, and Joram the father of Uzziah, and Uzziah the father of Jotham, and Jotham the father of Ahaz, and Ahaz the father of Hezekiah; and Hezekiah the father of Manasseh, and Manasseh the father of Amon, and Amon the father of Josiah, and Josiah the father of Jechoniah and his brothers, at the time of the exile to Babylon. And after the exile to Babylon, Jechoniah was the father of Shealtiel, and Shealtiel the father of Zerubbabel, and Zerubbabel the father of Abiud, and Abiud the father of Eliakim, and Eliakim the father of Azor, and Azor the father of Zadok, and Zadok the father of Achim, and Achim the father of Eliud, and Eliud the father of Eleazar, and Eleazar the father of Matthan, and Matthan the father of Jacob, and Jacob the father of Joseph, the husband of Mary, from whom was born Jesus, who is called the Messiah» (Mt 1,2-16).
We can read the story of Tamar in chapter 38 of the book of Genesis. Judah, one of the twelve sons of Jacob, after going down from his family, marries a canaanite woman and has three sons from her: Er, Onan and Shelah. Tamar is the wife of his first-born, Er. Er prematurely dies without leaving an offspring. The law of levirate marriage (see Deut 25,7-10), then in use among the Israelites, says that the brother of the dead must take care of the widow, take her to himself and give her children. The first of them is considered offspring of the dead, so that his name would not be extinguished among the people. Onan refuses to carry out his duty as the older brother of Er and because of this injustice dies too. Judah, now without his first sons, promises to Tamar that he would give her the younger one, Shelah, when he would reach the proper age. Time goes by and the words of Judah appear like an excuse to wait and keep with him the last son, «for he said, “Lest he also die, like his
brothers.”» (38,11). Tamar understands the deception and organizes a trick to enforce the right that was denied to her: she covers her face with a veil and pretends to be a prostitute on the road to Timnah, where Judah is going to pass. Judah, who was a widower, does not recognize Tamar and decides to have intercourse with her. She demands a pledge for the payment: «Your signet and your cord, and your staff that is in your hand» (38,18). Tamar falls pregnant and in the third month, when the fact is visible, she is denounced to her father-in-law Judah: «Tamar,  your daughter-in-law, has played the prostitute; and moreover, behold, she is with child by prostitution» (38,24). He does not suspect the real paternity of the child and sentences her to be burned. While Tamar is being lead to the fire she sends him a message: «“By the man, whose these are, I am with child.” She also said, “Please discern whose are these – the signet, and the cords, and the staff.” Judah acknowledged them, and said, “She is more righteous than I, because I did not give her to Shelah, my son.”» (38,25-26). In a family marked by death (wife and first two sons of Judah) the faith and the courage by Tamar bring new and abundant fecundity: she will give birth to the two twins Perez and Zerah, mentioned in Jesus’ genealogy. Follow in the next episode with the story of Rahab.