Dear Readers of LeonardoVfashionbook would like to present to you proudly yet another Example of the Artisitic Skills of Mr. Leonardo V.
The Mater Book and Exhibition  all the ” Mothers” and Women of this world
The images are 54 that compose the original cycle, constitute an evocative spiritual path through the figure of the  Virgin Marie view through a multicultural anthropological vision, opening a  reflection on the woman’s essence, combining an ancient wisdom and fall into oblivion with a prospective without any doubt revolutionary and full of universal symbols.
Maria Buccellati, his inspiring muse, is revised by the artist through a game of constant and crossed references to paintings of sacred art as to portraits,objects of queens from different origins,times, space and ages, that he realize all over the world.
The one Mater,  is at the same time strong and warrior, maternal and concrete, being able to take care of herself and of the others with the same intensity and passion. 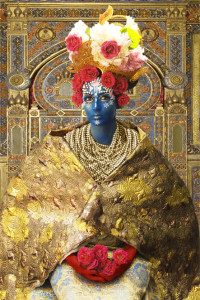 To those who share the idea that the artist’s role is to anticipate the esprit du temps, the work in this book will certainly fully in the canons. It represents a personal interpretation of a phenomenon present though not yet widespread, that is what you are searching a fusion of aesthetics and spirituality, attitude that more and more people is possible way for the survival of modern society, clearly looking for new patterns of behavior.
There is an urgent need, for that matter, given the now-starts and less slow decline of western social model, which also involves those eastern countries that have adopted it. In these times of uncertainty, particularly, the role of the artist devoted to experimentation, including the author of this work Leonardo Vecchiarelli, plays an important role, almost vital, I think. Considering it obviously no stranger to that group of artists on tracks repetitive production or already known, I believe that Leonardo stories in this book, the atmosphere of an esprit du temps reasoned, understandable, and that can speak to many people. To those who see a pure aesthetic value but important update, as to who understands that spirituality is now well again essential. Leonardo, for those who know him personally, however, continues to tell his personal story, now in the balance between the natural sense of aesthetics and a more recent, strong and vital need for spirituality, the same one that led him to travel and long periods of withdrawal in religious areas, from Jerusalem to Assisi. It is the curiosity of travelers led by spirituality that allowed him to present this work in which it is clear that personal memories of various kinds are mixed together in each image, often becoming the guiding spirit. They are photos that first remove all doubts about his ability aesthetic: innate, of course, but certainly honed by his work as a photographer, celebrated by magazines all over the world. An esthete who uses photography to convey a spiritual message then, but thank goodness away from ruthless fundamentalists and need catechizzanti. It is therefore undeniable that the personal journey of the Leo closer and closer to the artist altogether. Men and creative look come together for the benefit of an ability to read a more poignant and profound spirit of our time. One of the zeitgeist which, in this book, Leonardo shows us his personal vision.